Sometimes we see awesome ideas in the community. Sometimes we find them on Pintrest. I have railed against reinventing the wheel. I stand by that. 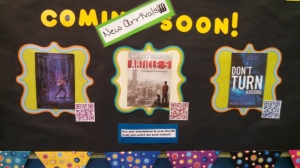 I am a public librarian, but I frequently visit schools. I just found a fantastic idea.  Brooke Fuendling from Lincoln College Preparatory Academy created a bulletin board that was so cool it merited a photo on my smart phone. Then, I forwarded the photo to all of my system’s teen librarians.  It featured a bulletin board where Ms. Fuendling promoted new books by posting QR codes to the book trailers alongside pictures of the novels’ covers. What better way to hook media-savvy teens than to let them use their technology to view a commercial for the book you’re promoting?

It isn’t just with high schools, though. My daughter is in elementary school. Last year I would walk by the school’s library every day when I picked her up from after-care. The librarian there decorated the doors. Some of these designs were so ingenious that I snapped photos of them with my camera. (In one, my daughter looks adorable next to a Truffla tree). Anyhow, they were so impressive that I went into the library at the end of the year to compliment the librarian on her work. She thanked me but said that she found all of her ideas on Pintrest. I signed up for my own account shortly thereafter.

I understand that copyright is an issue. You don’t need to exactly remanufacture anything. You can absolutely use ideas as a springboard, though. Plus, sometimes people are excited to share. When I told Brooke Fuendling how much I loved her bulletin board and that I showed it to my colleagues, she was tickled. I didn’t submit this blog until I had her permission to use the information about her and her creation.

I want to give a shout-out to non-school related organizations. This summer, we had so much staff from the Library out at once with back-to-school fairs that we did not have an available tablecloth.  I went to a health fair hosted by our county immunization clinic. You can bet that my eyes were all over the tables of my colleagues who were also there. How did their displays promote their organizations? The next time we did not have a tablecloth, I was prepared. My table sported a simple standing sign with “Kansas City Public Library” and our logo clearly on it. I hadn’t seen this sort of sign put up by another community partner, but I recognized how their legible organizational names and logos were central to how they represented themselves and their areas.

Anna Francesca Garcia earned her Master of Library and Information Sciences degree from the University of North Texas and has worked for a decade in public libraries in Nevada and Missouri. Her seven-year-old daughter’s superpower of choice is flight. Anna Francesca would rather teleport.